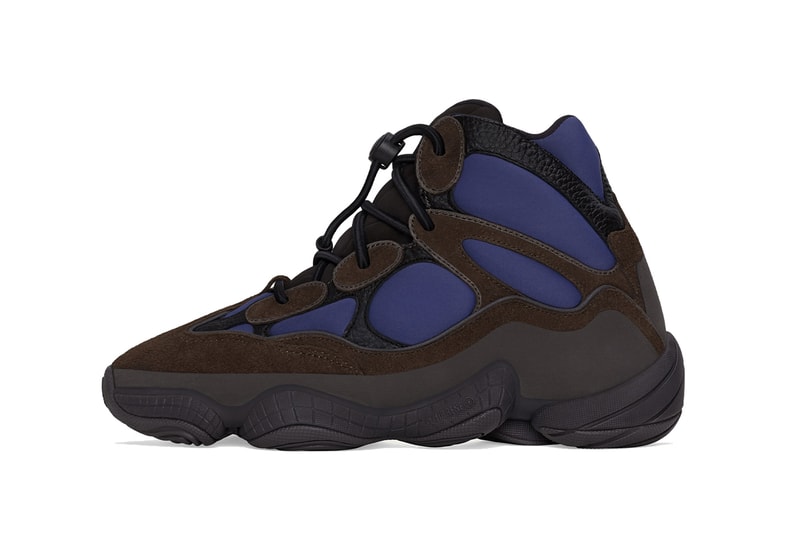 Kanye West and adidas's YEEZY 500 High is back in a striking new "Tyrian" colorway. The first high-top YEEZY 500 to release since December 2019's inaugural "Slate" makeup, the "Tyrian" plays up its unique build with a bold look that's half basketball shoe and half hiking boot.

Ultra high-cut uppers are built of three main materials: neoprene, suede and leather. Each piece of this trifecta uses a different color. The neoprene base, visible between a multitude of overlays, is dressed in blue, the wavy mudguard and eyestays equip brown suede and further trim/embellishments use tumbled black leather. Thick circular black elastic laces are secured with a toggle and sit on top of a black neoprene tongue, while the podular adiPRENE midsole is dressed in a sharp steel grey shade to finalize the look.

When viewed from the side, this divergent-yet-dashing assemblage of tones and textures is undeniably reminiscent of predecessors like the YZY DSRT BT. However, the basketball-themed midsole and overall build differentiate it just enough. Alongside other new silhouettes like the YEEZY BOOST 700 MNVN, YEEZY 700 V3 and YEEZY QNTM, the 500 High "Tyrian" is a bold benchmark in a new chapter of the YEEZY line.

Set to release globally via the adidas webstore, YEEZY Supply and retailers like END. on May 16, the YEEZY 500 High "Tyrian" is priced at $220 USD and is only available in men's sizes.

West's contemporary and good friend Virgil Abloh made news recently as well, with a "University Blue" colorway of his Nike Rubber Dunk appearing over the past weekend.