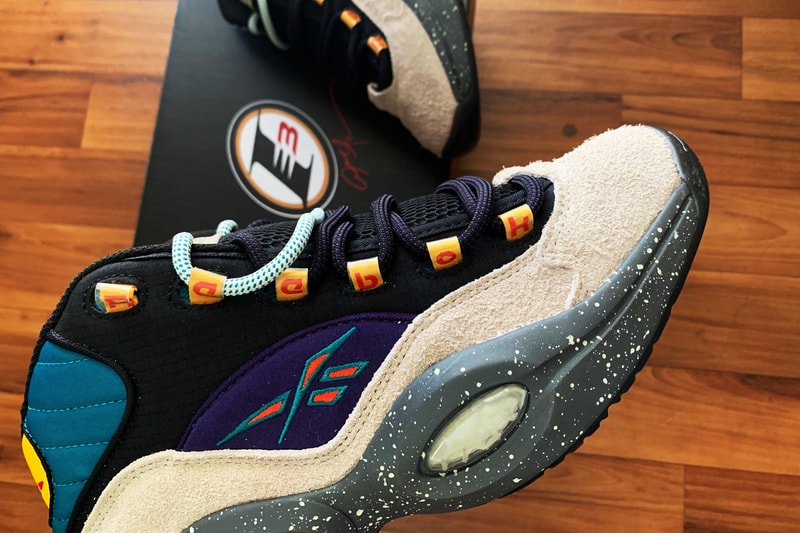 Allen Iverson was known for his smoldering intensity on the NBA court, but the pugnacious point guard wanted to unwind, he looked to a much more tranquil activity: fishing. Now, AI's favorite hobby is serving as inspiration for the new Nice Kicks x Reebok Question "Bubba Chuck." Iverson grew up fishing in the James River near his hometown of Newport News, VA, and even said in an interview that he wanted to be a professional fisherman. The shoe's moniker is also a nod to one of AI's most well-known nicknames.

Constructed from a mixture of vibrant and neutral-toned pieces, this Question Mid gives off a look that's almost Nike ACG-esque. Rich purples, cool aqua blues and bright yellows/oranges on the upper contrast with black ripstop quarter panels plus shaggy tan suede toeboxes and mudguards. However, the lower half is where the fishing inspiration is truly reeled in, with glow-in-the dark speckles on the grey midsole that match the glowing laces and Reebok Vector on the tongue. According to Nice Kicks' Frank Cooke, this embellishment represents the "illusive characteristics of a tactical lure."

Small Nice Kicks logo on the outsole's heel and customized insoles finalize the look. Nevertheless, friends and family iterations of these special Question Mids take things even further; they're packaged in a tackle box with a bucket hat, personalized fishing license and die-cut stickers.

A release date for the Nice Kicks x Reebok Question Mid "Bubba Chuck" has yet to be announced, but you can expect an arrival on the Nice Kicks webstore later this spring or during the summer.

To see what else is headed your way on the footwear front, take a look at the latest installment of our weekly Best Footwear Drops list.