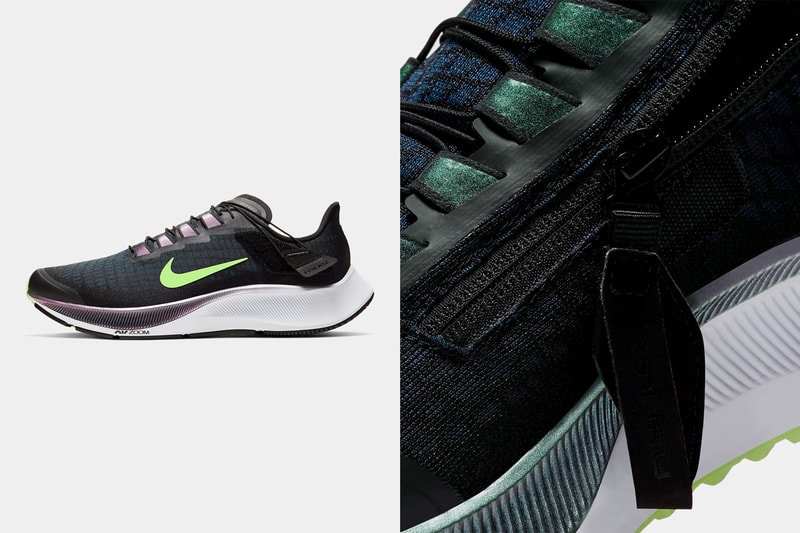 Nike's signature Pegasus line has been around for almost four decades, and its latest model — the Air Zoom Pegasus 37 — was recently unveiled. Mere days after this debut, it was also announced that this new model would arrive in an Air Zoom Pegasus 37 Flyease iteration. An inclusive lacing system that can be secured and undone with one hand, Flyease calls upon zippers, Velcro and elastic bungee-style laces for an easy and adaptable fit. It's used on everything from basketball shoes to special Air Jordan 1s, and it's been part of the Pegasus line since the Air Zoom Pegasus 32 Flyease, which released in 2016.

Debuting in a striking "Valerian Blue" colorway, this latest Flyease-equipped Pegasus is nearly identical to its standard lacing counterpart. Uppers are still constructed of a rich blue mesh with iridescent accents, but the volt green Swooshes are slightly shrunk to allow room for the fit system.

This two-piece lockdown mechanism uses elastic laces that can be tightened or loosened with a simple tug, secured by a Velcro pull that can be anchored on the lateral side. The medial side then adds a zipper so you can step in or out freely with just a push or pull. Down below a speedy React foam midsole offers a soft feel, with a sizable Zoom Air puck in the forefoot ensuring a responsive toe-off with maximum energy return.

The Nike Air Zoom Pegasus 37 Flyease is set to release April 30 on the Nike webstore, and is priced at $120 USD.