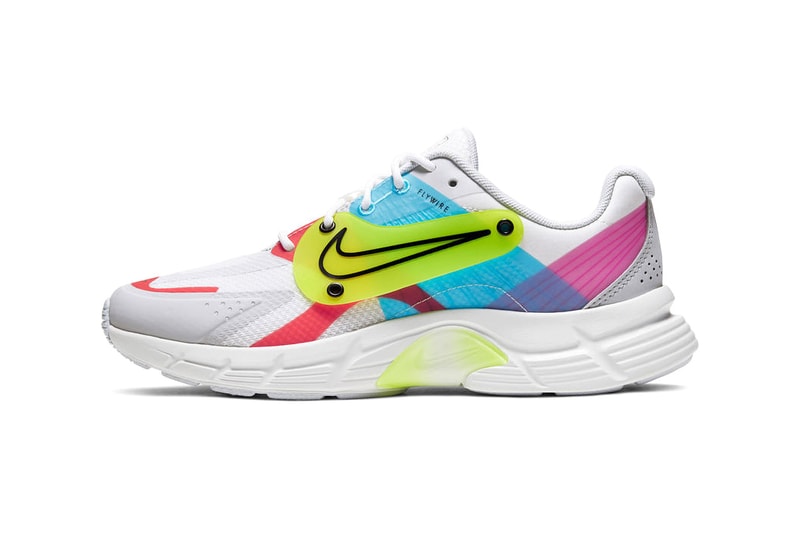 Nike is nodding to the genesis of its impactful Flywire tech with a new Alphina 5000 lifestyle silhouette. First put on a global stage at the 2008 Olympic Games by athletes like Kobe Bryant and silhouettes like the Hyperdunk, Flywire is a support system made of high-tensile Vectran or nylon threads that's still used on several performance models today. Now, the Alphina 5000 aims to salute Flywire's initial look in both vibrant and elegant fashions.

This throwback aesthetic is achieved by a duo of makeups, one dashing multicolor and the other a more down to earth gray. Each uses a classic running shoe-style mesh upper, and adds visible overlaid Flywire on the midfoot and heel. The colorful pair uses its white base as a canvas for red, blue and purple tones, while the gray pair keeps things monochromatic, opting to let the layered look speak on its own without any further coloration.

Regular branding is also swapped out for a hangtag-style Swoosh graphic that's secured to the upper by three anchor points: one eyestay and two metal studs. On the more vivid pair, this appealing alternate graphic is presented in volt/black, while on the gray pair it's done up in gray and white.

The Nike Alphina 5000 will release via the Nike webstore this spring. A retail price has yet to be announced.

Elsewhere, the Nike Air Flight '89 and Benassi were recently added to the "Planet of Hoops" pack.