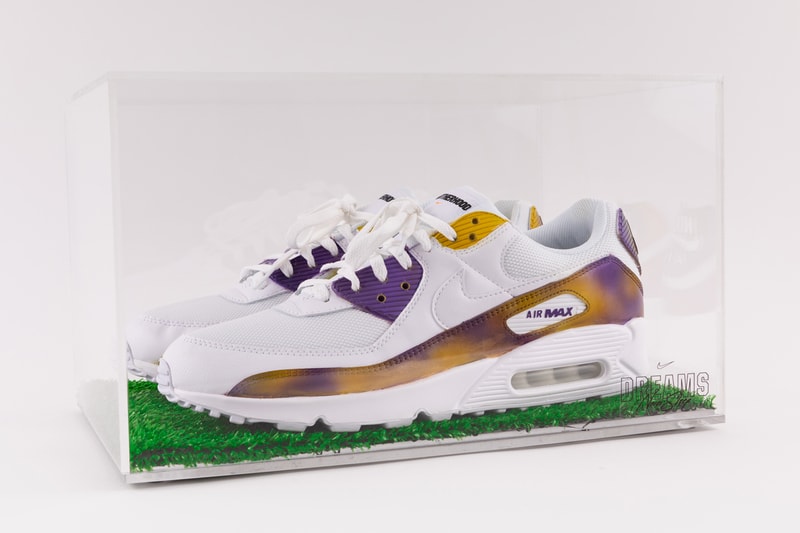 Ahead of the 2020 NFL Draft, Nike has created custom draft-night footwear for four of its top incoming rookies. Quarterback Joe Burrow, wide receivers Ceedee Lamb and Jerry Jeudy plus running back De’Andre Swift will all wear special PE makeups of the Air Max 90 or Air Force 1 while they await their selection from home — as this year’s draft is being conducted remotely due to the coronavirus. Likely #1 overall pick Joe Burrow, the Heisman Trophy-winning captain of the LSU Tigers is the only member of the quartet to opt for an Air Max 90. The spray can-style yellow and purple print on his white shoe nods to the colors of the Tigers and the city of New Orleans, with a ribbon-inspired pattern acknowledging the Tigers’ 2020 National Championship. There’s also a “Burreaux” hit on the insoles, inspired by a special jersey Burrow wore on Senior Night this past season. Oklahoma Sooners wide receiver Ceedee Lamb’s white and red Air Force 1s with a gradient-equipped Swoosh offer a fleur-di-lis for a salute to his Louisiana roots. The #32 is a nod to his uncle, who he credits all his football ability to — and has honored by wearing #3 in high school and #2 in college. “Too Far From Your Heart” is printed on the insoles, acknowledging Lamb’s desire to keep pushing through injuries. Alabama Crimson Tide receiver Jerry Jeudy’s Air Force 1 uses blue and red accents on its white base to honor the Hatian flag for a nod to his heritage. A sparkling silver Swoosh adds flamboyant flair, and his #4 is present on the heel as well. Last but not least, Georgia Bulldogs running back D’Andre Swift’s Air Force 1 features a patriotic red and blue gradient, inspired by his hometown of Philadelphia. The city’s skyline appears on both lateral heels. “Beyond Blessed” is printed on the insole, acknowledging Swift’s fortuitous path to the NFL from humble beginnings.

For a finishing touch, each is packaged in a clear plastic display case, complete with an artificial turf lining. See all four pairs here, and look for the 2020 NFL draft to kick off Thursday, April 23 at 8 P.M. ET.

Elsewhere, it’s been rumored that UNDEFEATED and Nike Sportswear may be working on three more Air Max 97s.