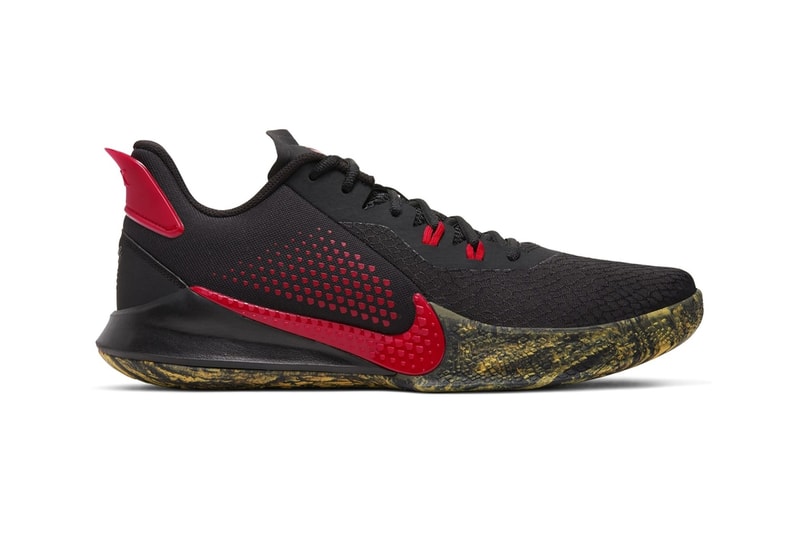 Nike Basketball has quietly debuted Kobe Bryant's first signature shoe since his sudden passing in January: the Mamba Fury. A new takedown model in the vein of past budget-friendly Bryant releases like the Mamba Instinct and Mamba Rage, the Mamba Fury offers the sleek and technical look Bryant's Nike line is known for at a lower price point.

Arriving in both "Black/Red" with a marbled yellow outsole and a simple "Black/White," each low-top style features details like a dropped plastic Swoosh on the midfoot with textured detailing, a scale-like print on the mesh upper and Kobe's signature Kill Bill-inspired sheath logo on tongues and heels alike. The overall shape is reminiscent of models like the Kobe 6 and Kobe 8, while a heel spoiler seemingly nods to the Kobe A.D. line. Cushioning is provided by a forefoot Zoom Air unit.

Although 2020 was set to be a banner year for the Nike Kobe line with several commemorative styles of the Kobe 5 Protro releasing, those plans were halted after Bryant's heartbreaking January helicopter crash. Since then, many in the Mamba's legions of loyal fans have been clamoring for as much Kobe product as they can get their hands on, even elevating the desire for a budget basketball shoe like the Mamba Rage — a silhouette that would normally fly well under the radar — to high levels, with bids on StockX currently reaching 2 1/2 times the Mamba Rage's $100 USD retail price.

Pairs are set to arrive at retailers like Famous Footwear and Grosbasket in the coming weeks, but an official date has not yet been set.

Elsewhere, Bryant was recently named as a member of the Naismith Memorial Basketball Hall of Fame's 2020 class alongside Tim Duncan, Kevin Garnett and others.