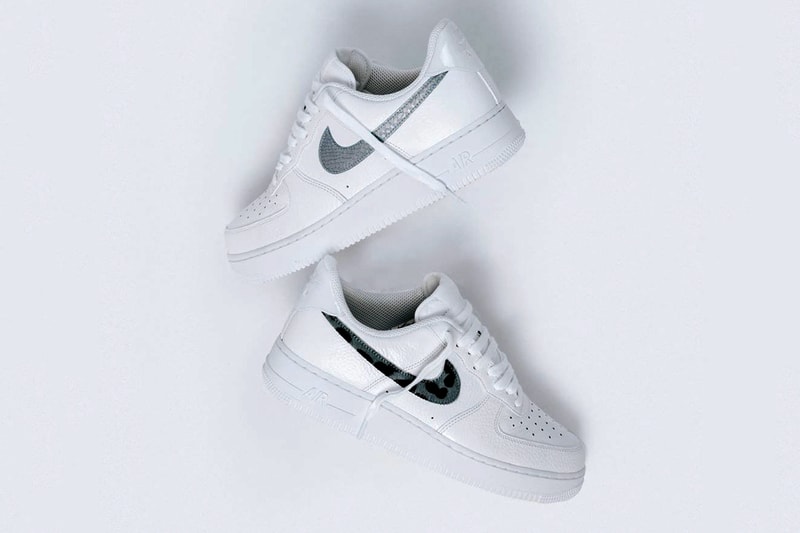 Nike Sportswear has brought premium animal print Swooshes to its two latest iterations of the Air Force 1: "White/Midnight Turquoise" and "White/Club Gold." With the crisp base that's made the Force a Nike lifestyle favorite for decades and luxurious embellishments, both of these uniquely-checked AF1s offer sublime summertime style.

Nike Air Force 1 | US 8 – 13 | 120 € | Available now via solebox.com and instore at all solebox locations except Brussels. . The Nike Air Force 1 is known as one of the most iconic silhouettes in sneaker history. This new model features a classic white upper with dark blue snakeskin or ponyhair swooshes. Get this new colorway now via solebox.com #nike #solebox #airforce1

Both pairs use their Swooshes for contrast, but do it in a different fashion. "Midnight Turquoise" serves up a dark, blotchy cow print on the right lateral and left medial sides with shimmering blue snakeskin coming to the right medial and left lateral panels. On the other end of the spectrum, "Club Gold" goes for croc on left lateral and right medial, then adds cow fur to right lateral and left medial. Unintentionally or otherwise, both of these make for a predator and prey setup, an ethos rooted in atmos's famous "Animal Pack" Air Maxes.

A final difference arrives via the heel and tongue branding — "Midnight Turquoise" stays tonal while "Club Gold" adds more secondary color. White rubber midsoles and outsoles round off both styles.

These special AF1s are available now at retailers like Solebox and Sneakersnstuff, each priced at $120 USD.

Moving to a different Swoosh subdivision, Nike ACG has readied its ACG Moc 3.0 in "Midnight Navy."