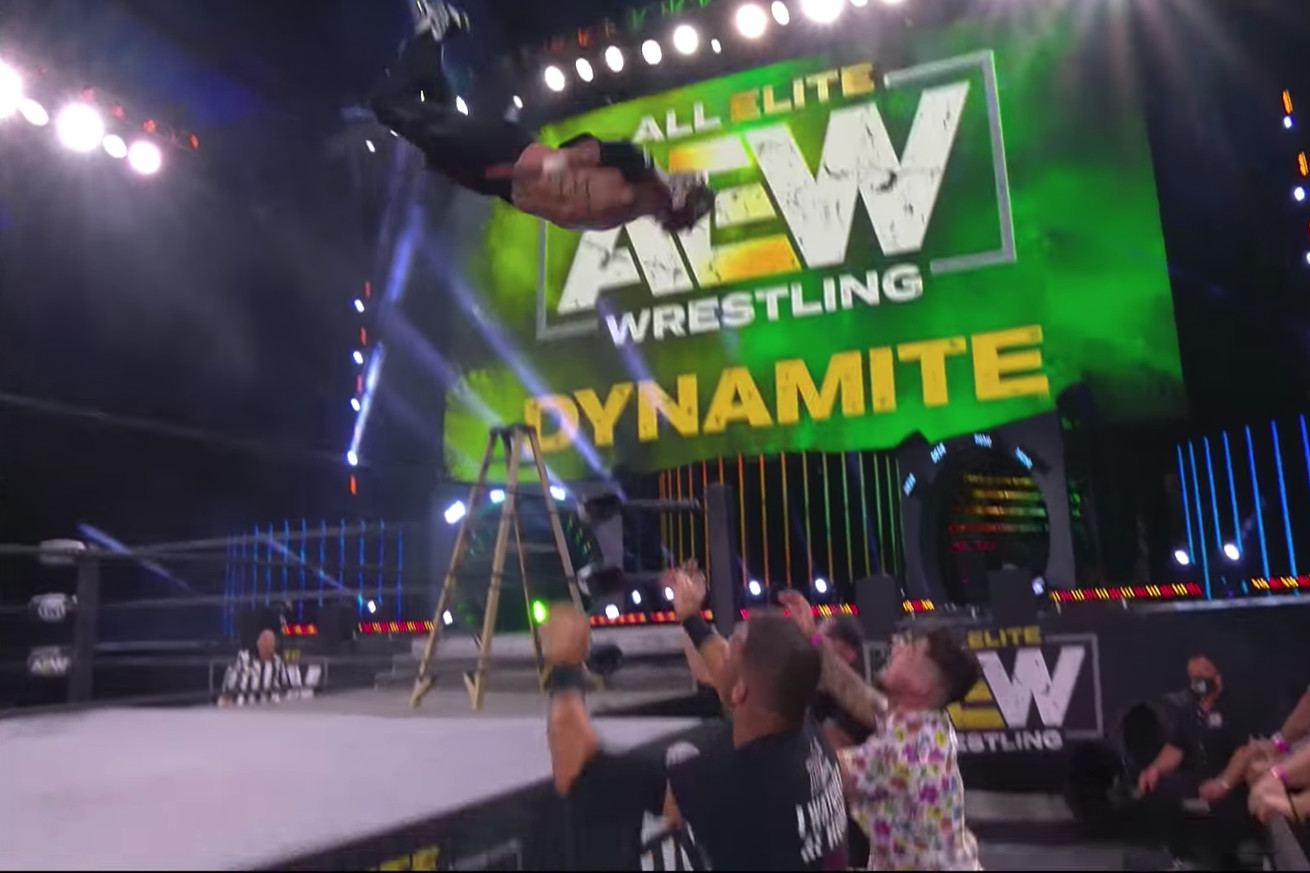 Who knows if AEW has to make some last-minute adjustments for their pay-per-view now.

Professional wrestling is the only sport someone can do flips 15 feet in the air, fall on their butt, and maybe still be okay. This week, James Dator and Hector Diaz look at all the potential injuries from Dynamite and how they might impact AEW’s upcoming pay-per-view, Double or Nothing on May 23.

James Dator: God, there were so many injuries last night.

Hector Diaz: There was definitely more than one injury that went down at AEW Dynamite’s go-home show. And I understand that you need to sell Saturday’s pay-per-view, but using all those high-flying moves might not have been worth it. Of course, this is with the power of hindsight. But if the participants in the ladder match were seriously injured, especially the eventual winner, then AEW might have to make some adjustments on the fly. I hope everyone is healthy enough to perform.

JD: Based on early reports it seems like Fenix and Orange Cassidy will be okay, which should preserve the ladder match. However, it seems Britt Baker might be seriously hurt — which is a monumental shame. Nobody has improved more over the lockdown period than Baker, and to me she’s legitimately one of the most compelling wrestlers to watch right now. It’s extremely disappointing the match against Kris Statlander might be jeopardized.

Baker’s character work has been so good over the last three months. I have no doubt they’ll find ways to make her interesting.

HD: AEW has done a stellar job of modifying their storylines when they don’t go as planned, as far back as their first pay-per-view event this time last year. PAC was supposed to take on Hangman Page at last year’s Double or Nothing, but it didn’t happen. Instead, we got Page winning the Casino Battle Royale and that eventually turned him into one of the most popular wrestlers. I’m sure that Britt Baker will get some sort of similar treatment. At the very least, this means we’ll get vignettes of Baker bullying Tony Schiavone while she’s on the mend.

JD: Circling back to what you said, I have to give them credit for not taking their foot off the gas at the go home show — but it all felt sloppy and way too risky. That said, I think they did a good job selling most of the matches into Double or Nothing, and like last week I felt more interested in the show that before it started. Also … they’re not teasing an Arn Anderson vs. Jake Roberts match … are they?

HD: I would have loved to see it 25 years ago, but I don’t want to see it now. I hope they’re teasing it just as a means to hype up the Cody-Archer match, and I’m sure there’s going to be some hi jinks going into the match where they’ll interfere. Give me one Arn Anderson spine-buster — maybe not to Jake —and I’ll be happy.

JD: I just don’t want to see a boomer die in the ring, to be honest.

HD: Yep. Again, not worth it! Also, based on Brodie Lee sacrificing his favorite cult follower this week, do you think he’s going to do something similar in the AEW Championship match against Jon Moxley?

JD: That match is the biggest question mark for me. All logic tells me Mox retains because it’s only been three months, but I really wouldn’t be surprised if Brodie walks out the champ to set up a huge rematch. Mox has been a great champion, but his character naturally lends itself to being better on the hunt than on top. In terms of sacrifice, absolutely. I am 100% expecting a ref bump, the entire Dark Order coming down to assist — and every single one of them eating a Paradigm Shift.

HD: I wouldn’t mind seeing that. I also want to see who the final entrant in the ladder is. If it’s a big name, and especially if they play a heel, then that might be the writing on the wall to say Mox will retain later in the pay-per-view. Then they would face Moxley in a championship match.

JD: Brian Cage makes too much sense. I know Drew Gulak is a logical choice too, but when you tease a mystery entrant it needs to have a “holy shit” quality to it, and even if Cage might not be known among every fan — you see a guy who literally looks like he could bend a steel beam with his hands and it makes you sit up. Plus it helps balance out the field which is very small-medium sized guys, then Luchasaurus. Having a second big man would be excellent.

HD: I can see Brian Cage being that mystery entrant, especially since he was rumored to be signing with AEW before going down with an injury. I agree with you that the surprise entrant needs to have that wow factor. Just think of how impressive he’s going to be if he ragdolls someone like Darby Allin in that ladder match. I can see him catching someone in the middle of a tope suicida and transitioning that into a suplex.

HD: I still think I’m most excited for the Stadium Stampede match since it has the potential for big and weird pro wrestling moments. You can get your storyline from Cody and Lance Archer and your championship match from Nyla Rose and Hikaru Shida, but you won’t get someone crashing into a tub of Dippin’ Dots in those matches. We can see Sammy Guevara get beat up and make the most incredible expressions of agony like he did this week on Dynamite. After all, who doesn’t love Sammy Guevara getting beaten up?

Which match are you looking forward to the most at Double or Nothing?

JD: It’s gotta be that ladder match. I can’t help but feel like I’m going to have to watch it with my hands covering my eyes, because I’d legitimately terrified for the competitors. In-ring, I think they’re going to destroy themselves to put on a show, but I also think it’s going to help set the tone for the future — and get a better idea of how AEW views its mid-card guys. That is, assuming we don’t just have a huge name come into the mystery slot and obviously win it.

HD: I think that’s the best part of AEW right now, and maybe for the foreseeable future. Aside from your Jerichos and Moxleys, there aren’t that many wrestlers you can point to as the top stars. And that’s great because everyone will get their chance in the spotlight and amplify all of them, not just one.